If orthodontics sounds like a boring field to invest in, you probably haven’t heard of Align Technology ( ALGN 0.83% ).

Far from being a dental supply company, the core of Align’s business is its Invisalign transparent teeth straightener, which helps people improve their smiles more fashionably and more comfortably than traditional straightening solutions like braces.

And where there’s disruption of an old paradigm with a new one, there’s money to be made for those who are willing to invest, which is exciting. 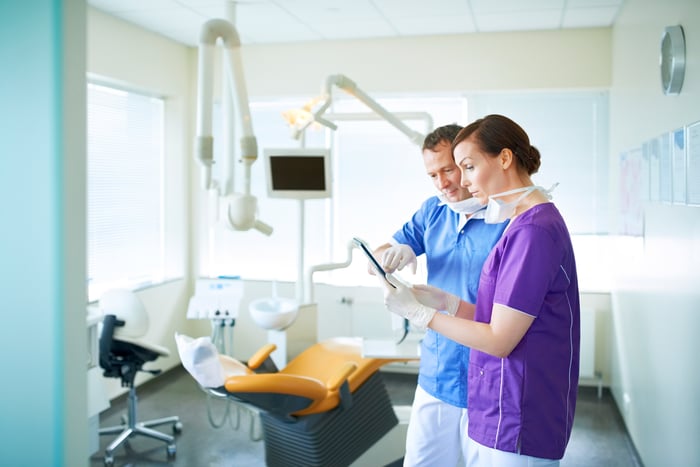 The key to appreciating Align’s value as a company is to understand why its Invisalign product is so much better than the traditional alternatives.

Rather than enduring difficult sessions at the orthodontist’s to install, adjust, and eventually remove the straighteners, patients get their teeth imaged by the company’s 3D scanner devices. Then the clinician molds a transparent aligner body to the shape of their chompers but adjusted for the corrections that the person needs. After that, the patient wears their customized aligner, easily removing it when necessary to eat or drink.

Eventually, they have a smile that’s closer to the aesthetics they’d prefer. And the ease and appeal of the entire process is making the company rich.

Last year, it sold about 55% more of its Invisaligns than it did in 2020, generating nearly 60% more net revenue in the process. For 2021, its total take was $3.9 billion, with a surprisingly high sum of $705.5 million derived from sales of imaging systems and software services rather than aligners. And management is betting that net sales will rise by as much as another 30% in 2022, which it says is in keeping with the business’s long-term average growth rate.

There are a few reasons to believe that the leadership team’s confidence is well-placed. One especially handy capability that’ll allow this company to grow more than it might otherwise is its digital experience for prospective and current patients.

If someone wants to know whether their teeth might be eligible to be straightened with Invisalign, they just need to download the MyInvisalign app and upload a picture of their smile. From there, they’ll get guidance on whether they should seek a referral to a practitioner — and if so, the app helps them find local ones. After that, everything from appointment scheduling to arranging insurance coverage and virtual follow-ups is handled by the app.

Slashing the friction of screening and onboarding new customers is a significant competitive advantage, even if it’s possible that others will seek to imitate it over time. The app also has a powerful tool that lets people see a computer-generated image of what their smile might look like after their treatment is complete. When it comes to advertising techniques, it’s hard to imagine anything much better.

Furthermore, with a market share of approximately 10%, Align is strongly positioned to continue its global expansion, which it considers a strategic priority. Last year, it sold 69.5% more cases of its straighteners to customers in Europe, the Middle East, and Africa, and it’s currently building a new global manufacturing hub in Poland to serve hot demand.

Headwinds are few and far between

There aren’t any recurring bugbears or major looming threats that investors need to be aware of with Align Technology’s stock at the moment, but there are a few minor things.

In particular, its operating margin may continue to come under some pressure — as it did most recently in the fourth quarter, when it dropped from 25.7% to reach 21.4%. Management cites foreign exchange losses and spending more on marketing and research and development (R&D). The additional spending will help to drive more growth, so it isn’t alarming.

Likewise, investors would do well to note that the company performed exceptionally well in 2020, which makes 2021’s net income growth appear to be low in comparison. As it turns out, over the last five years Align’s annual net income has grown by 234%, and there’s no indication that the favorable trend is petering out; nor is there cause to think that it will anytime soon.

In my view, Align is a great stock to buy this year for investors who want growth. But be aware that it has been hit particularly hard by the ongoing drama surrounding the Federal Reserve’s plans to hike interest rates, as have most growth stocks. So it might not beat the market, at least for the time being.

This article represents the opinion of the writer, who may disagree with the “official” recommendation position of a Motley Fool premium advisory service. We’re motley! Questioning an investing thesis – even one of our own – helps us all think critically about investing and make decisions that help us become smarter, happier, and richer.